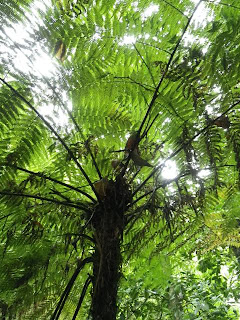 I know, after religion and feminism, trees seems a big change in direction! But it's nature, like my Wildlife Wednesday posts, so a big part of my life.

When I was 5 years old, we moved house. I don't remember the first house much, and I've no memory of any trees in the backyard of the first house except for a mandarin tree which Mum called a thorny mandarin tree and I had to stay away from the thorns. I've no idea if there were thorns or if I was just being kept from climbing the tree!

Anyway, our new house had a few trees but two were my favourites and became 'my' places. One was technically the neighbour's tree, but it was a Weeping Willow with half the fronds weeping on our side of the fence. I spent quite a bit of time in my castle under the willow, often with my dog. Right next to these fronds was a pencil pine, in our yard, and although it was there, it held no great place in my heart. Certainly nothing like the beautiful willow.

The other tree that had a place in my heart was right against the front verandah. The verandah had cutouts in the brickwork that made paneless windows, and there was like a concrete slab over it, so you could sit on it (I'll see if there's a photo because that's a terrible description!). Then there was this spot you could climb to above the stairs, and it was my favourite reading spot. I was screened from the street by the tree, but Mum could see me from the house. When I was young, I could climb into the tree and nestle in the branches but as I grew, this wasn't possible.

These trees were very important places for me. Sadly, both were cut down during my teenage years and I have to say that it hurt. Not so much the loss of hiding spaces, because I'd outgrown the spaces, but the loss of friends.

Yep, I considered the trees as living beings, not unlike my pets, or my school friends. I didn't know this was weird. I mean The Faraway Tree was one of my favourite stories, and that tree was a living being, wasn't it?

It was somewhat of a rude awakening to realise that people saw trees as easily dispensable, if not a complete pest!

I have 'collected' favourite trees everywhere I've lived. Trees that have some connection to me, which I can't explain at all. I like being near them, touching them, admiring them, and I may chat to them too. I like trees, but there are always special ones.

Some years ago, one of my friends was talking to me, and she's into all psychic things but sort of for fun, not entirely seriously. She had a deck of cards to tell you what you were in a previous life. She'd done herself and her kids and we'd been laughing about their cards. She drew one for me, and began laughing. Through her laughter, she managed to say I was a tree person. I froze. I'd never told anyone about my thing for trees. When she realised I wasn't joining in the laughter, she says, 'What aren't you telling me?' I told her about my trees, in a quiet little voice, expecting censure or more laughter. But she was gobsmacked.

We sometimes recall that moment, as we explore this psychic, mystical, alternate world. Our scoffing disbelief has changed to curiosity and a sense of maybe...

I've no clue if I was a tree person in a previous life. I don't even really know what a tree person is/was. I think they were pre-Druids. And I'm not sure it's important. I like trees. I have an affinity for some trees more than others. I like animals. I like nature. That's just me.

So trees are a part of my searching. I know it's probably incredibly odd but it's me. And as the weeks go on, I think you might find that trees aren't so odd at all ;)

Do you have a favourite tree?
Posted by Cate Ellink at 9:13 PM