This is the start of my new series if posts on Searching for Something. I'm not sure what it is, sort of a search for myself, and the meaning of life, or my life at least! I think it might be a -0 age milestone. A change in hormones. Who knows. I just have been doing some exploring and finding amazing things that I'd like to share, and write about some of my experiences.

They're not going to be mainstream for the most part. And my views are probably not those of the majority. However I will try to be honest, and give a reasoned discussion as much as I can. 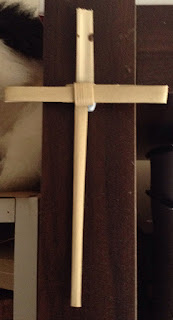 I was raised in a conservative religious household, in quite a strict Catholic manner. I had no bad experiences in Church as a kid. We had fantastic priests who challenged me to a lot of deep thinking when I questioned them. I did bible study classes, played music at Mass, read the Readings, all those things that you do when you're highly involved in something. Before I left home, I was on the liturgy committee, taught Sunday school, played music, and was still highly involved.

My parents were also highly involved, and Mum had a real devotion to her religion and God. At about the age I am now, she began going on annual retreats and learning more about her spirituality. She did a daily scripture reading and wrote about it. I guess it was like a meditation, or a placing her life and her worries into a spiritual context.

Religious discussions were not uncommon in our household. I asked a lot of questions. The priests we knew were quite incredible theologians and so if they came to dinner, discussions were many, varied, and not to be missed. We had all orders of priests and nuns that were family friends and were often part of meals, or family events. And it wasn't confined to Catholicism. I studied comparative religions in Yrs 11 and 12, so discussions could range across any and every topic imaginable especially when I asked questions. Sometimes these discussions went long into the night, leaving poor mum nodding off at the table trying to be a great hostess, while Dad and I and whoever was visiting were wide awake and into the discussions.

When I left home, I was given a blessing during Mass in our Parish and presented with a Parish Candle. It was a really touching moment to be recognised in my community. A community I'd been an active member of for my entire life.

I moved to a country town, and I know the religious people in Sydney were despairing of where I went because the Bishop was quite strict, behind-the-times, and was in the middle of a huge dispute with the local nuns. They all probably knew were things that I'd struggle with, before i knew it myself. I was lucky in that I found the one 'cool' priest in the area and I loved attending the little church. I bought half a fan for that church when they asked parishioners to help cool the place. People gave what they could, so an older gentleman and I went halves in a fan. It was a great little community and I felt quite at home.

And then the priest got moved. He hadn't toed the Bishop's line and was banished (I think they termed it, 'moved on'). Soon after that, I walked out of church in the middle of the sermon. I'd had an absolute gutful of the hateful rhetoric that the priest was spewing out, so I up and left. I'd never done that in my life and it scared me. I kept waiting for lightning to strike me dead. It didn't.

I'd been brought up in a conservative, religious environment, but what I'd failed to notice was that as a bedrock, there was compassion and love. In this area, those were not the bedrock.

Fire and brimstone was the bedrock in the new area. Pre-marital sex, being homosexual or promiscuous, not obeying the Bishop's rule, these were all a feature of the heinous things done by people...and the reason I walked out of the church.

I never really returned. I came to see that people made the church and the community. One person in authority could ruin the entire place. One non-understanding, closed-minded man could kill community, make people turn towards hate, and ruin what had once been a loving family environment.

I didn't want to be a part of something where I had no voice and no control. I didn't want to support horridness, and closed-minded people. I know I have turned my back on many lovely people, but it's what I needed to do. I don't believe that large communities should be under the rule of one man in complete control. It got on my goat, terribly.

Religion, as with other things, can breed fanatics. I struggle with fanatics. I like moderates, people who allow everyone to be - or at least allow others to express their opinions openly and be heard. I like discussions, not rules. I abhor dictators.

Religion gave me a fabulous grounding in life. I've learned a lot from many discussions. I have respect for the many and varied religions of the world. They just aren't for me. I'm a lone wolf in my approach to (or quest for) spirituality.

Interestingly, on my Pinterest account, I've only ever received one rude and nasty comment from a stranger, and that was about something I pinned saying religion had started many wars. So if you'd like to leave a comment on my posts, please feel free to do so, but if there are any rude or nasty comments, they will be deleted. Thank you.