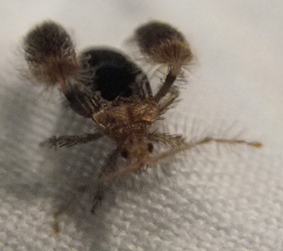 I don't even know how I saw this bug. It's about 5 mm long, so it's tiny. It was sitting on the corner of my bed (my sheets are underneath it, so you can see how close I was to get these shots - I don't usually notice the weave of my sheets!). I moved the curtains and this guy made some movement that caught my eye. Needless to say, I ran for the camera. I had never seen anything like this bug! 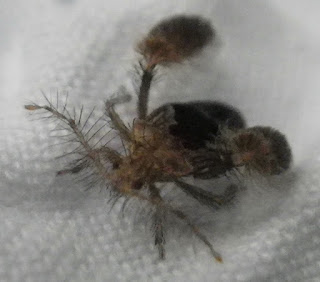 So, I had to look him up. Desperately. What if it was something awful!?

I googled. I couldn't find anything that resembled this in the pictures.

I grabbed my insect books, and began flicking and looking and even keying out! I was worried.

Then in the tiny corner of a plate in one book, there was a scientific name - Ptilocnemis femoralis. I went searching.

And he's not out to get me. He eats ants! His name comes from the way he hunts and kills ants (not unsuspecting humans!).

Here's the trusty Australian Museum website's information about him. There's a second photo there to click on that looks much better than the one on the first page.

And here's a little snippet from there:
The Feather-legged Assassin Bug is a specialist predator of ants. They are found under the bark of eucalyptus trees. They position themselves somewhere on an ant trail with their long legs raised. This exposes a gland which produces a scent attractive to ants. When an ant investigates the gland and tastes the substance coming from it, it is the last thing it will do. The substance paralyses the inquisitive victim and the bug drives its rostrum into the ant. When the bug's digestive saliva juices have done their job, the ant is sucked dry.

Relief - for me anyway! The ants aren't quite so lucky :)

Have you ever seen such a beast? (You won't have Lily, because they're in eastern Australia).