This week has seen the November full moon, which is also the closest the moon will get to Earth until 2034 - and it hasn't been this close since 1948.

Monday was the 'best' day. I'm pretty experienced at 'failed' natural phenomena due to unforeseen circumstances, so I figured I'd go Sunday and Tuesday too, just to see if I could get a good look.

Sunday - I was running late. And there was cloud cover, so that was a failure. 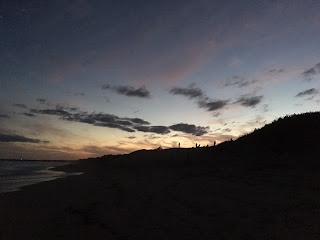 Monday - cloud cover. But I sat, freezing, waiting. There was a big crowd at the beach (more people than I usually ever see on the beach!). About 10 mins after the moon rise time, I saw this weird hazy shape that looked like the moon. I took a photo. Then thought I was hallucinating because it was pale, hardly visible. In the end I told myself that we only have 1 moon, so it had to be it. As it went behind clouds, I left the crowds on the beach who were still waiting for the super moon! 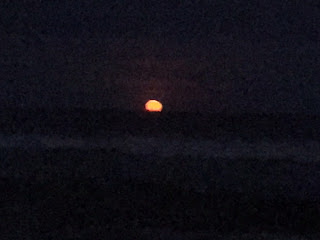 Tuesday - later arrival of the moon, which would mean it was dark at moon rise. I was thinking this would be the night. Trundle down to the beach. Once again, there was a decent crowd. As the sun was setting, the crowd made a nice silhouette on the dunes (photo). Then I waited. 8.18pm was moon rise. At 8.20pm I sent a text to Mr E saying I was coming home. And then, an orange glow lit the Eastern sky over the ocean. Snapped a shot (photo) and sent it to Mr E, who wasn't very impressed. And then I watched the beautiful orange ball rise above the ocean, streaming golden light towards my feet as I paddled in the waves.

My photos are crap, but my heart was full. As full as the glorious super moon! :)