Sea cucumbers are one of the weirdest things underwater - well, I think so anyway! They are many and varied types of them, but they all are kind of slug-like (or in the case of this photo, it could do for a Friday post!) 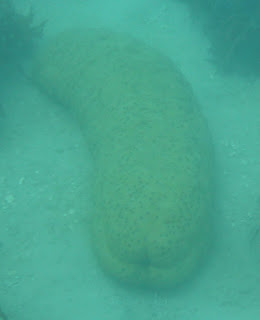 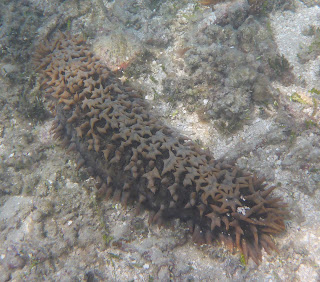 Sea cucumbers are echinoderms, related to sea urchins, sea stars, brittle stars and feather stars. They have spiny skin, although sometimes the spines are small and unobtrusive. The spines help them move along the sand, acting like crampons when climbing in snow.

They eat by filtering sand through their mouths as they move, extracting any nutrients. Kind of doing a similar job in the ocean to that of earthworms in the soil.

On the National Geographic webpage, I particularly like this bit - When threatened, some sea cucumbers discharge sticky threads to ensnare their enemies. Others can mutilate their own bodies as a defense mechanism. They violently contract their muscles and jettison some of their internal organs out of their anus. The missing body parts are quickly regenerated.

Sea cucumbers bred sexually and asexually. The most usual is sexual where a large group of sea cucumbers release eggs and sperm into the water and when they meet, fertilisation happens. Romantic, hey? ;)

Sea cucumbers can be eaten and have been for centuries in China. I can't say I'm keen on trying them...but there are worse things to eat!

Photo notes: The two cucumbers in the really green shots were at a deeper depth to the other two shots (maybe 10m deep compared with 4m). It makes a big difference to the lighting of the photo, doesn't it?