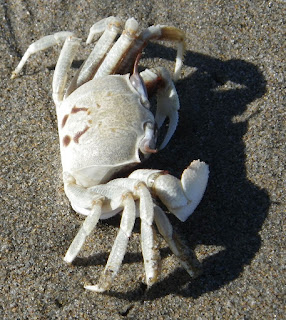 Once again, I've no idea what this crab is! I thought maybe a ghost crab, but this is about 10 cm big, not the 4 cm that ghost crabs grow to be (this is my post on Ghost Crabs).

Then I thought maybe surf crab because apparently they're the only crabs in Sydney with two red spots on their back - but must be different down the coast, because surf crabs have modified back legs as swimmers, and this guy just has legs.

It's like what I'd call a fiddler crab with one nipper much much bigger than the other...and maybe that's just what he is. You can find some info here.

It says that they're found - Fiddler crabs are intertidal animals that live in mangrove forests, tidal creeks, sandbars, mudflats or, occasionally, stone or boulder beaches. - 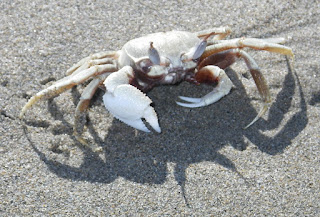 and that's not where I found this one. Our beach is a sandy beach and we're halfway along, so no stones or rocks are near us. We are near a river and a sandbar, so it's possible he got washed into the sea and I was just lucky enough to catch him coming out.

He was asleep (?) when I saw him. I took the first photo and another, thinking that he was probably dead but the photo was going to be okay. Then I'm squatting in front of him, like in the second shot but a little more straight on, when all of a sudden his eyes popped up on his stalks. How I didn't end up flat on my backside to be drowned in the next wave, I'll never know. I laughed like a kid, then sat chatting to the crab while I took more photos. I'm ever so glad our beach is usually empty! People would have thought I was mad :)
Posted by Catherine at 12:00 AM