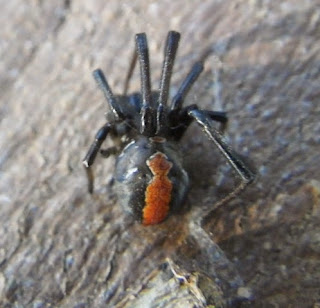 We've been having some wild winds here the last few weeks, and because I'm surrounded by glorious trees (even if Mr E fears they'll fall on the house and kill us both), there's always a lot of debris after wild winds. Because of Mr E's dislike of our neighbour's trees, I often scurry out to pick up the fallen bits before he does it and complains mightily. (Hope he's not reading my blog!)

Anyway, this week, when picking up stuff, I came across a rather unexpected fellow on bark that had fallen - a redback spider. I've seen a few around but not many, so this was a surprise...and I was glad to see him, not feel him!

The trusty Australian museum webpage (here) tells me that redback spiders are found throughout Australia, and spiders of the same family are found worldwide. The Black Widow Spider found in the US is a relation to our redback.

The female spiders have this very distinct red marking, the male's red is often less distinct, and juveniles also have white markings on the abdomen.

The lifecycle information is interesting (taken from the Australia Museum website):

Once the female has mated, she can store sperm and use it over a period of up to two years to lay several batches of eggs. She spends much time producing up to ten round egg sacs (1cm diameter), which are white, weathering to brown over time. Each egg sac contains approximately 250 eggs and only one to three weeks need to pass before more eggs can be laid. These sacs are suspended within the web.

The young spiderlings hatch in two to four weeks. Spiderlings are cannibalistic and will eat unhatched eggs and other spiderlings.  The spiderlings disperse by ballooning to another suitable nest site on long silk threads that are caught by air currents.

Male Redback Spiders do not produce a web, but may be found on the fringe of a female's web, especially during the summer mating season. The male has to make overtures to the female to discover whether she is ready to mate, which can prove fatal if she mistakes him for prey. It has been found that in order to occupy the female's attention during mating, the male spider offers her his abdomen by standing on his head and 'somersaulting' his abdomen towards her mouthparts. The female begins to squirt digestive juices onto the male's abdomen while the first palp is inserted. If he is not too weak, he will manage to withdraw, and then insert the second palp. She will continue to 'digest' his abdomen. Most males do not survive this process, which seems to be unique to Latrodectus hasselti (redback spiders).

First Aid for a redback spider bite is to apply an ice pack - not a pressure bandage. Fortunately, I didn't need that!
Posted by Catherine at 12:00 AM