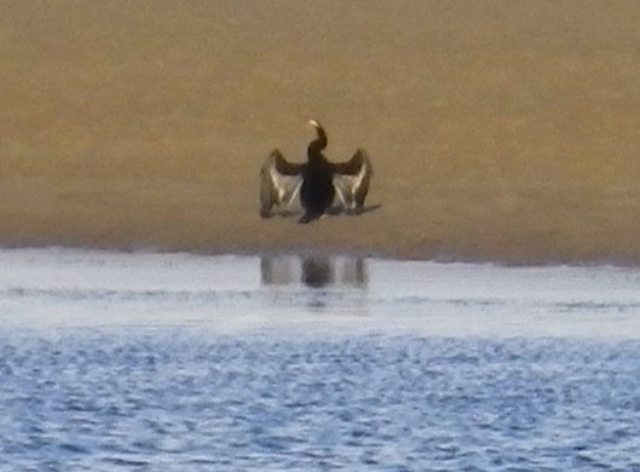 The Shag, or the Little Pied Cormorant, is a bird I've recognised for many years. My grandfather had a distinct dislike for the birds when he was fishing. He was convinced they went hunting for his bait, or his fish, and would take off with his fishing line (or maybe he made that up for my entertainment!). So a Shag duck-diving into the water always makes me think of Da.

The Little Pied Cormorant is black above and white below. They hang their wings out like this to dry, because their wing feathers are not waterproof. You often see them basking on rocks in this pose, and usually in groups, not singly. There were a bunch of cormorants on the sand here (in the river at low tide - when I extended my backyard again!) I just zoomed in on this one by himself.

Oh, look what I found in my web searching:
The diet of the Pied Cormorant consists mostly of fish. When foraging, the cormorant swims low on the water, and when it spies a fish, it quickly plunges below the water’s surface. When it pursues the fish, it swims by propelling itself with its large, webbed feet and steering with half-opened wings. Fish may be eaten below the water or when the cormorant returns to the surface. Unfortunately, cormorants sometimes also feed by stealing the fish that have been caught in fishermen’s nets. Taken from here. Maybe Da wasn't making up stories for me!

Little Pied Cormorants breed either in colonies or, less commonly, in single pairs. The nest is a flat platform of sticks, lined with green leaves and is usually placed in a tree. Both adults share in egg incubation and care of the young.