Wildlife Wednesday - Butcherbirds and others 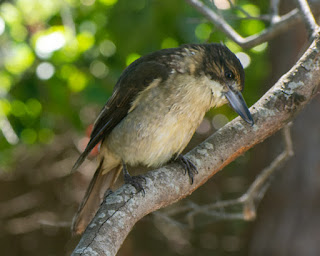 Over the past 12 months, I've had some strange wildlife, and nature, experiences. I've put them down to the bushfires that decimated so much land south of us, and the resulting changes being nature's reaction/coping to the changed vegetation and territories.

The number of bird species around my house has increased, hmmm, no, that's not right. I have the same number of species but they're closer and interacting more, breeding all together, and sharing territory in a way I've not seen before. When once they may have visited here for a short stay, now they've all moved in.

There's this respect of one another, and a sharing of territory and food, that's unusual. 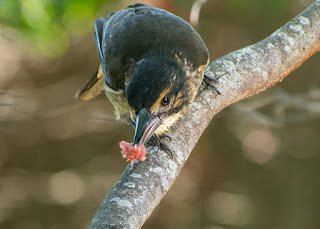 The birds are hungry. So much so that they've taken to asking for food. I have always fed birds on a rather ad hoc manner. So that they don't ever become reliant on humans for their food. That way, if I go away, or die, the impact on them will be minimal.

When we first moved here, we had two old dogs. Their food bowls were picked at by birds and possums, slugs and lizards. So, my home has been known as a food supply...but no one really uses it much, except some of the King Parrots. 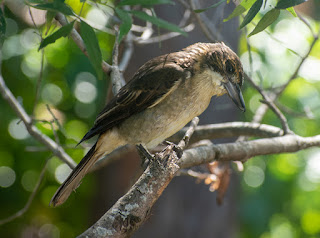 This year, we had birds nesting within usual territories. Crows in the tree above my house, magpies in the next tree down. Masked plovers, pee wees, pigeons, noisy minors, king parrots, lorikeets, butcherbirds, pied currawongs, kookaburras, corellas and cockatoos all had chicks locally through spring. 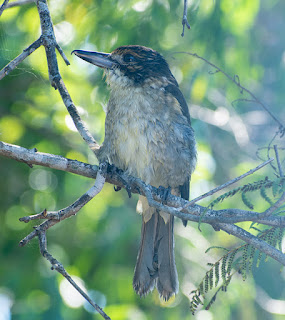 In winter, the magpie pair began to visit and sing, daily. Sometimes twice of three times a day. After a while, I began to worry about this. In the summer, I had left fruit wreaths in the local area for fruit bats (primarily, although I know other animals feasted too). We had a local group who helped with fruit and vegetable supply to wildlife who'd lost their habitat. I began to wonder if the birds were affected too - by territory loss due to birds being forced closer together into unburned country. So I tossed the magpies some food, which they devoured.

They didn't come every day, just at random times (often when it was raining). 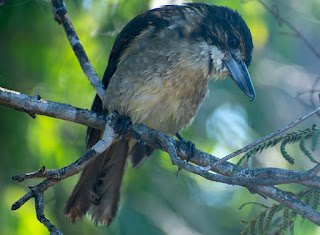 The magpies raised three chicks, and while they were in the nest, the parents came quite often to ask for food. I began to keep a supply. Sometimes the Australian Ravens (crows) would come too and sit in the trees around, before they'd clean up any scraps left behind when they thought I wasn't watching. Then I noticed the Noisy Minors and Pee Wees coming around too.

Now there's the Butcherbird and Kookaburras too. They all eat the same food source, and they sort of share my offerings.

I mean, they're not willingly giving food to other species, but they're taking turns to be fed. They're happy to stand back and wait for food to come their way. There are very few squabbles. And no one picks on the chicks... of any species.

It's the most peculiar thing for birds I associate as territorial.

I've begun to wonder if it's not just bushfires. Our town has lost a lot of large trees in the last decade - because people chop them down. Habitat is being cleared and changed at a greater rate than the birds (wildlife) can adapt to. Maybe the need for survival relies more on cooperation between species. maybe this is the new normal, where species coexist in smaller areas, sharing what meagre food and homes there are available.

Today I played catch with the Butcherbirds. The Magpies and Crows, with Noisy Minors, were on the lawn grabbing feed. I could see the Butcherbirds, with their chick squawking, in the tree, so I tossed them a small amount of food - which they caught in their beak. I tossed a little more and they moved to actively catch the food. They darted to either side, front or back, depending on how close my throw went. They flew off the branch sometimes if my throw was wild.

I don't know if I can explain how filled with joy my heart was by feeding these birds. It's been a blessing all year to have their company, their beautiful songs, their gentle presence, and their incredible daily life on show. To have the young around and to watch them grow has been incredible.

I don't know why all these birds have graced me with their presence, but it's been a thrill and a joy to have them as a part of my life - even when they sit at the door, singing so full voiced it's deafening, until I give into their demands!