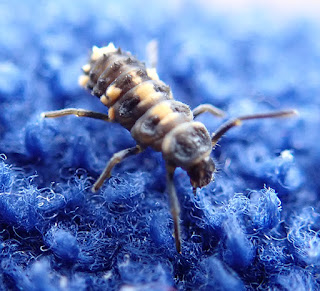 On Monday, I was typing and I noticed a tiny bug on my sleeve (it was an old blue polar fleece and the bug had yellow spots on it, which is what I saw). I took a few pictures but it wasn't a happy chappie and wouldn't cooperate for photos. So I popped it outside on a plant.

I downloaded my photos and they weren't that good because focussing on a moving tiny is tough for my little camera.

But then... I'm in a photo group on Facebook and this woman puts up the most beautiful photo of a bug so very like the mystery bug I'd photographed that day. She said it was a ladybird larvae. I looked it up and she was spot on! Not only was her photo in focus and stunning, but she had an ID too. 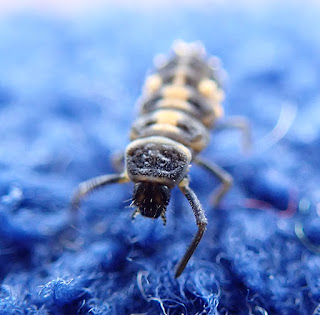 Her larvae was orange spotted, but mine's yellow - and that's the majority of ladybirds I'm finding at the moment too.

So, here's my not-that-well-focussed ladybird larvae.

You might get an idea of how tiny it was (a few mm) from the lumps on the polar fleece.

And if you want to check out some more, here are a few sites with info:


And I'm going to stop here, or I'm going to fall down a ladybird rabbit hole and never get out!!! What a fabulous bug to find. Serendipity at work :)