I read The Atomic Weight of Love by Elizabeth J Church this week and this long review with spoilers is me trying to have my own book club to organise my thoughts. So if you don't want to read spoilers, please stop now. 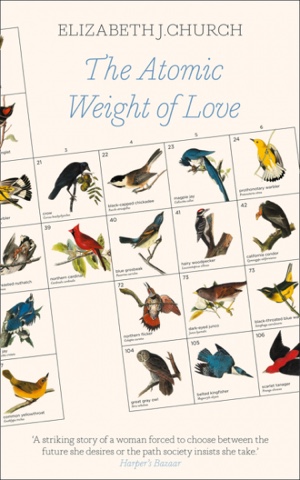 This is an incredible debut novel. It's a deceptively easy read because it's well written, smooth flowing, but packs so much into the story.
Essentially, it's the story of a woman's life. It opens when she's 88 and then it's a reflection on her life from early childhood to date.
It covers an interesting time period for women, science, society and the world in general. It spans the 1940s to the 1990s in some detail. The choice of protagonist, Meridian Wallace, and her choice of husband, Alden Whetstone, allows an interesting view of the times.
Meridian is one of the few women in her science classes at university, although she has female friends (I got the impression they were nurses). She's planning to go to graduate school to study crows for a masters and/or PhD. I don't understand the American education system very well, but it seemed Meridian completed her degree but no post-grad degree. Interestingly, later in life she's mixing with wives of scientists and all these wives seem to have PhDs and look down on her - it made me wonder how so many women got PhDs when Meri came across so few women in her classes, but it's a minor issue :)
While at uni, Meri attends an extra lecture given by a physicist who's discussing the mechanics of flight. After the lecture, she has coffee with the man and continues their discussion of flight and physics. She feels this is a meeting of the minds and she's quite taken with the discussions with Alden, even if he is 20 years older.
While engaging in these discussions over coffee/meal, Meri is stepping out with fellow student, Jerry. Jerry appears to be a 'player' and Meri's friends are quick to exchange info about Jerry's other girls. To me, Jerry seemed honest and cared for Meri, respected her choices, beliefs, brains, and was a better choice than the vague, Alden.
War breaks out and both men end up leaving Meri for the war effort. Jerry goes to fight; Alden to work on nuclear research. Again, Jerry writes and attentive, while Alden is vague and his work takes precedence. Meri's friends tell her that Jerry writes to other girls too. Meri becomes engaged to Alden, yet it takes her an awful long time to admit this to Jerry, who severs contact. Meri really never faces/admits feelings for Jerry, and this is one of her major character flaws for me. She's very like Alden at times.
Alden's work requires secrecy and Meri has dreadful trouble with this. It hinders their discussions. It affects their letters with censorship making more black than words. In some ways, Meri's rebellion against the censors is reflected later in her relationship with Alden.
Meri defers her offer of grad school to marry Alden and follows him to Los Alamos, after the war.
Much of the story from here is about Meri's struggles to fit in, to know who she is, what she wants, and what her purpose is in life. She's intelligent, but it seems as if her emotional intelligence is stunted. She's definitely an introvert, and in so many moments I felt a deep connection to her, yet there were times when I struggled to understand her logic, her reactions or her non-reactions.
Unable to study, she does field observations of a local community of crows. There are some lovely descriptions of the crows and the crow community, and yet it takes an outsider and geologist to ask the question of radiation and the impact of the nuclear testing on bird life.
The question isn't addressed in the human community either - even when Alden develops massive tumours.
There's a strong 'feminism' theme in the book. Meri attends university and studies ornithology, after her mother has worked hard to afford to educate Meri after her father's sudden death. Meri gives up her career to be a wife. Meri is excluded from Alden's work, as are all the wives. Some wives accept this, and accept their subservient role, but not Meri. Women's lib is given some air time. Childlessness, and the role of children, is discussed. As is the lack of knowledge of the female anatomy, even among doctors. Lack of female sexual awareness, lack of discussion about sex among women, and lack of female orgasm, and indeed pleasure, is also touched upon.
There is quite a lot of social commentary in this book - or I took it to be social commentary. As well as women's lib, wars, particularly WWII and Vietnam, are discussed. There are characters who have various war experiences that allows Meri to ruminate, philosophise, and comment even if she has no direct involvement.
Common moments in life appear in the story - marriage, birth, death, illness, love, loss, friendship, agreement, disagreements, domestic violence, personal boundaries, sacrifice, philosophical differences, and questions regarding whether you should make life decisions for yourself or for others, or with others in mind.
This book made me question myself and my life choices. At the same time it gave reassurances and reasons why people make the choices they do. The book had me questioning love, because of the many different forms shown.
I found myself reflecting on how far women's rights have come in the last 80 years...yet it made me realise how many things had not changed at all.
It was such an interesting and intriguing book, deceptively easy reading despite being jam-packed with themes and topics that have filled me with thoughts and questions and commentary.
I'm glad I picked it up. The birds in the periodic table was a brilliant cover (the US cover I'd never have noticed). I look forward to the next book by Elizabeth J Church.
Posted by Cate Ellink at 6:01 PM