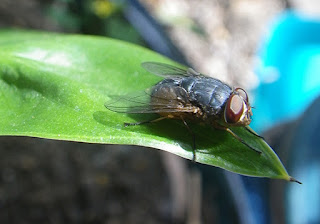 It's summer in Australia and as well as heat, storms, cricket and the beach, there are flies. On the coast there are few compared with inland, but they're still there - sticking to you, lapping at your sweat, threatening to walk into your nostril or mouth, even trying to dart into your mouth while you talk or breathe! Don't swallow one because they hurt your throat and make you gag!

When I was at uni, we collected flies in a fly trap and had to identify them. Yep, you guessed it, I was useless at identifying them...but I did learn that there were different types of flies and I don't think I'd ever paid enough attention to that before then. 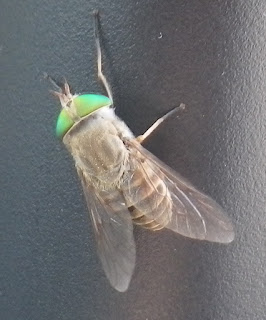 So the other day, I drove down to the beach and this green eyed fly came home with me - hopped into the ute and stuck around for the lift. His eyes were incredible and so I spent a bit of time trying to get a good photo because I don't think I've seen a fly with eyes so bright - not for a long time.

Okay, so I looked it up and it says it's a march fly (also called horse fly or green head)...and we do have them here because they like biting me and I'm usually swinging around like a madwoman trying to swat them while jumping from the pain of that sharp stinging bite, but I've never seen one with such brilliant eyes. Lucky he didn't bite me when I gave him a lift! Oh, check this - the males don't bite - As with most biting flies, it is only the female march flies that bite as they need blood to produce the next generation. They use their strong, piercing mouthparts like a needle to extract blood from their mammal hosts. The males have larger metallic green eyes and feed on nectar. Taken from the Australian Museum website http://australianmuseum.net.au/march-flies  Maybe I've always attracted the females for my tasty blood. (Don't handle the larvae, because they can bite too).

The blow fly (up the top) is the fly I most usually see, especially in summer. On a hot day they can get quite sluggish. We also have the little black flies, and the common house flies, but these two were big enough, and nice enough, to pose for a photo.

I hope you don't have too many flies where you are (and if so, I hope they don't bite!).