I have a soft spot for rural romance but this book is extra special. It's not only rural, but about grief, death, illness and transplants. It's also about small towns, the changing face of agriculture and football, of the AFL variety. And it's set in WA (just for Lily!).

Troy is the new footy coach for the town of Hyden, Western Australia (location of Wave Rock).

Indianna was instrumental in organising for Troy to come to town. She's a footy tragic and I love her.

Indi's struggling to find her place after leaving uni and coming home to care for her Mum who had cancer, and then her Mum's death. It's two years since her Mum died, and Indi's still doing everything her Mum did, plus working full time in a job she loves at the grain handling facility. 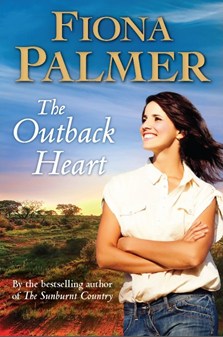 Troy had viral cardiomyopathy as a kid and has a heart transplant, he can't play footy but he can coach. He's a footy tragic too. His previous girlfriend, also a heart transplant recipient, has died and he's struggling to cope, not only with her death, but his mortality. He's pushed everyone away from him and has become a nomad, never staying anywhere long.

This is a really moving story, not only Indi and Troy's struggles with grief but it also tells of the struggles of a small town where the population is decreasing. Where tourism and itinerant workers don't build community, and the decline in agricultural workers means a loss of the social fabric of the town. It's a heart breaker of a story.

But, I have to add that a friend of mine recently had a tragedy in her family, and her son-in-law became an organ donor. She also read the book. So my heart break could be linked to those circumstances too, not just the story itself.

If you like rural romances, and moving stories, this is a great one.